I popped along to the All Blacks parade yesterday.

It was great to see the team and the lovely gold trophy up fairly close – and to see so many people come out to cheer a champion team! I did some enthusiastic waving and Dan Carter waved back in my general direction! My photos aren’t great but they give an impression of the event.

For more images of the parade and event in Hagley Park, as well as reporting from round the world the on the Rugby World Cup, why not take a look a papers from around the world, including the Press from the last few weeks in PressDisplay. 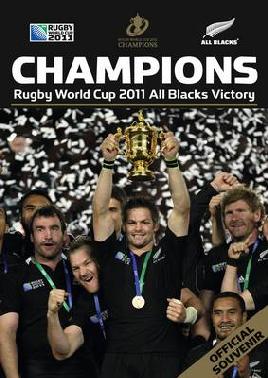 If the back to back World Cup wins has inspired you to find out more, we have heaps of books about the All Blacks.  Some of the older titles may well only be available reference only at Central Library Manchester‘s Aotearoa New Zealand Centre.

Check out our page on rugby, including our one on its history in Christchurch.

A new addition to our digital collection is the Log book of the ship Mirage : a shipboard diary kept by C.E.D. Goff, 1864.

The Mirage was a 718 tonne “magnificent clipper”. The ship’s log tells the story of its journey from London that began on 6 May 1864. 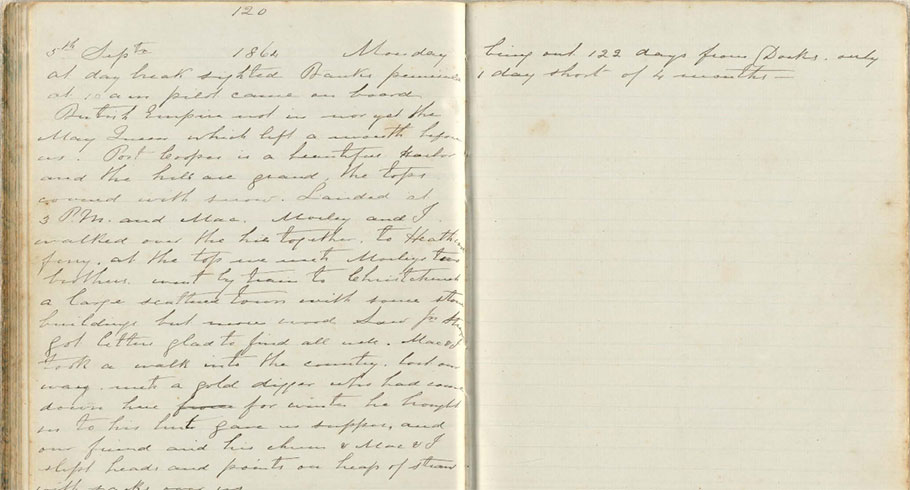 By page 43 of the log book (p.26 in the digitised log book) they are crossing the Equator – there  are antics involving a red, white, and blue pole, a doctor, a bottle, and throwing water on everyone.

After this trip, the Mirage went to Japan (according to this advert in The Lyttelton Times, 20 October 1864)

Papers Past can be used to track down more about the Mirage and its passengers.  On 1 November 1864, James Davis was charged with desertion from the ship and sentenced to 21 weeks hard labour.

Some people who settled here from the Mirage:

Log book of the ship Mirage : a shipboard diary kept by C.E.D. Goff, 1864.
The diary includes biographical information, a passenger list and information about the crew. Charles Edward Davis Goff (also called Davis-Goff) was born in Ireland in 1844. He came out to Canterbury on the Mirage in 1864 at the age of twenty. In 1868 he married Elizabeth Brydon in Marlborough. They lived first in Renwick, then in Picton, where Charles Goff died in 1879, aged thirty-five.

“Taking as their symbol the white feather, the chiefs Te Whiti and Tohu led Parihaka in one of the worlds first-recorded campaigns of passive resistance” 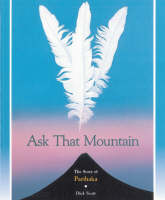 Parihaka settlement lies in the Taranaki region of Aotearoa, located between Mount Taranaki and the Tasman Sea. In the late 1800s, Parihaka was reputed to be the largest Māori village in New Zealand with a population of about 1500 and was described as the most populous and prosperous Māori settlement in the country. Parihaka had its own police force, bakery and bank and used advanced agricultural machinery. The village was founded in about 1866 by Māori chiefs Te Whiti o Rongomai and Tohu Kakahi on land seized by the government during the unlawful post war land confiscations of the 1860s.

Parihaka, the principal Maori stronghold in New Zealand, is an enormous native town of quite an imposing character….I never before saw such number of Maoris. It was such a picturesque sight, such gay colours, fine-looking men and pretty girls.

At dawn on 5 November 1881, 1600 troops and militia entered the Parihaka settlement, many on horseback. Although troops were met by hundreds of tamariki skipping, singing and offering food they, nevertheless, continued with their attack. In her book Days of Darkness on page 218, historian Hazel Riseborough claims:

“Europeans were concerned about their superiority and dominance which, it seemed to them, could be assured only by destroying Te Whiti’s mana. As long as he remained at Parihaka he constituted a threat to European supremacy in that he offered his people an alternative to the way of life the European sought to impose on them.”

The military assault on Parihaka with all its ensuing atrocities mark the 5th November, for many, as being the blackest day in New Zealands history.