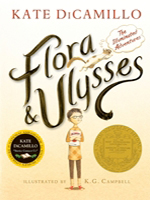 TumbleBooks are created by adding animation, sound, music and narration to existing books. We have access to two TumbleBook eResources:

TumbleBook Library is for kids. It contains a wide range of fiction and nonfiction titles including titles by Geronimo Stilton and Kate DiCamillo. These titles can be experienced in either automatic or manual mode. In automatic mode, the pages turn by themselves and are narrated. In manual mode, the narration is turned off and kids turn the pages at their own speed. Online puzzles and quizzes associated with the book can help with reading comprehension. If you know a reluctant reader who needs a bit more magic in their books to hold their attention then this could be the solution.

TumbleBookCloud is for teens. It has a read-along chapter books, audiobooks, drama and poetry and graphic novels. With these titles you can adjust the text size, line width and spacing, font style and colour. The enhanced novels include chapter/plot summaries, character sketches, and quizzes. The graphic novels could be particularly useful in getting teens who have little interest in the written word engaging with literature.

Have a play and spread the word about these two eResources available to you 24/7 with your library card number and password/PIN.