Prepare yourselves. From this point on things are going to get increasingly Star Wars-y.

My meaning is two-fold. 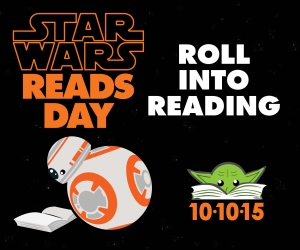 First, the official annual celebration of Star Wars and reading, Star Wars Reads Day is tomorrow. Shirley Library is playing host to a day of fun and activities and even some special Star Wars guests. It should be fun so if you’re a fan or have one in the family you should consider heading along.

Second, a new Star Wars movies is scheduled for release just before Christmas. On 17 December Episode VII: The Force Awakens (hits cinemas). Expect to see A LOT of merch in the shops between now and Christmas.

The Force Awakens is the first of the Star Wars movies to be made by Disney rather than Lucasfilm, and kicks off another trilogy (the third) in the scifi space saga. But that’s not all because some standalone films are planned, and then there’s the TV series’ and… you know what? Let’s make a nice list of these things. This is starting to feel like that time I tried to explain the Marvel Cinematic Universe…

Long ago, in the seventies and eighties…

George Lucas had always envisaged his rollicking space yarn as the middle segment of a much broader tale but I can imagine people in 1977 being confused and wondering whether they’d somehow missed the first 3 instalments. For much of my young life I believed, somewhat despondently, that these would be the only Star Wars films ever made. Boy, was I wrong about that…

In the meantime George Lucas and crew got busy making the first part of the story, in the process inventing, or at least popularising, the word “prequel”.

An animated series “Star Wars: Clone Wars” aired on the Cartoon Network (and online) between 2003-2005 and bridged the gap between episodes II and III.

I hoped at this point that this was the end of Star Wars viewing opportunities. Boy, was I wrong about that…

After the dust had settled a bit, Lucasfilm, capitalising on the derring-do aspect of the pre-Sith Anakin Skywalker character, and the success of the Clone Wars series made another animated series set between episodes II and III called, Star Wars: The Clone Wars. I did say this was a bit confusing.

In 2012 The Walt Disney Company acquired Lucasfilm and all the rights to Lucasfilm properties including Star Wars. Disney got into the swing of things Star Wars with their own animated television series set between episodes III and IV.

However, there’s also a Star Wars anthology series of stand-alone films. A trilogy of films that exist in the same Star Wars universe but are unrelated stories.

So we’re pretty much going to have a new Star Wars movie every year for the rest of this decade. Depending on your inclination this either makes you feel tired or really, really excited. If you’re the latter we have literally hundreds of Star Wars items in our catalogue.

May the books be with you!