It takes a lot to get me to go out after I’ve come home from work, but the chance to listen to Sarah Waters at Shifting Points of View definitely qualifies. The Paying Guests is one of my favourite books of the year – history, love, crime, and dilapidated houses – totally my jam! Here are some highlights.

Waters’ favourite was the Children of the Night Award by the Dracula Society, each trophy being a mini gravestone personalised to the winning book – check them out  (Fingersmith won in 2002).

“A bit of a bugger to write!” Epiphany came when agent described the novel as a crime story complicated by love, and Waters realised what she actually wanted was a love story complicated by a crime. She was initially inspired by reading about the trial of Edith Thompson and Frederick Bywaters and wondered what would happen if the affair was with a woman. It’s not all flappers and gaiety in the 1920s! 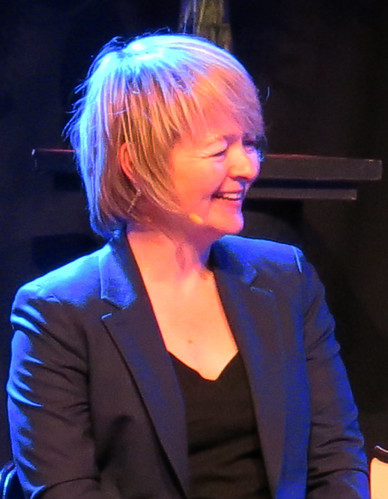 Currently in the research stages, probably set in the 1950s. Probably won’t be out for a while so if you want to read some other books in the same period I thoroughly recommend Eva Rice, particularly The Lost Art of Keeping Secrets, which as a bonus deals with a similar ‘genteel house falling into disrepair’ theme as Waters’ The Little Stranger and The Paying Guests. Decaying splendour, anyone?

Jeanette Winterson, Emma Donoghue and Mary Renault. I already love the last two (and we’ve been getting some lovely new editions of Renault recently in the library) so Winterson will probably be my next read while I wait for Waters to finish writing.

Sarah Waters clarified that she won’t be writing about known historical personages anytime soon – “The thought makes me feel squeamish!” – so if you’d like to read about a fascinating real 19th century Yorkshire landowner who happened to have multiple lesbian affairs, place a reserve on The Secret Diaries of Miss Anne Lister.

“People lived their life in colour, not in sepia.” Sarah Waters on the past. #wordchch#chchfest2015 ^DR

Read more of our Shifting Points of View posts.

One thought on “Sarah Waters at Shifting Points of View”