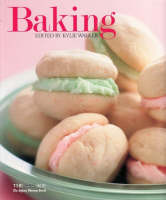 I reckon I’m a pretty good cook. Not one of those people who can take a bunch of weird ingredients and create something amazing at the drop of a hat, but when I’m in the kitchen I generally keep the customers happy. I had a flatmate who liked my pizza so much, he thought I should open a restaurant. I thought it would be a pretty boring pizza restaurant, since I only make one flavour! But still — happy customers.

I’ll admit I’ve had the occasional disaster.  My sister and I once made an apricot pie — lord only knows what we did wrong, but that thing looked so disgusting, we actually wrote “YUCK” on the top with the left over pastry. Anne Shirley-style lapses in concentration have made an appearance, like the time I put salt in the pancakes instead of sugar (that really was disgusting!) or the time I put a tin of bean salad in the pilaf instead of mixed beans (my lovely husband actually finished it — I couldn’t!). And there was that one pav I made that sort of looked like a pav pancake…

But those failures pale in comparison to the hokey-pokey whoopee pies that I tried to make the other day. As failures go, they take the cake. The recipe made them look so delicious, I just had to give them a try!  The biscuits themselves were a bit dry*, but not bad…the caramel butter cream filling though — complete failure! See, it all started with not having a small heavy-bottomed pan to boil the butter, cream, sugar, and golden syrup in.  I was worried that if I boiled it for 5 minutes without stirring (like the recipe said) it’d scorch — so I stirred it. Just a little. Just a couple of times. Surely that couldn’t make that much difference, right? Then I was to let it cool to room temperature, pour it into a bowl, and beat in the icing sugar.

Waiting for “room temperature” and “pouring” were clearly going to be impossible because the stuff was solidifying before my eyes! Perhaps if I just beat the icing sugar in straight away, thinks I. Nek minnit the beaters are stuck fast in caramel-concrete and unholy noises are coming from the motor. There was no turning this mess into anything that even vaguely resembled butter cream filling! I stormed out of the kitchen in disgust. But when I returned to bin the lot and clean up the mess, I found the beaters and bowl were already soaking in the sink.  Turns out Mr K didn’t think it was such a failure, so he’d hijacked it before I could bin it. Delicious it was. Fluffy butter filling it was not!

I’ve always said that anyone can be a good cook — you just have to find a good recipe and follow it. I’m not sure that I can blame this disaster on the recipe! Who’s game enough to give it a try and let me know? You’ll find the recipe in Kiwiana cupcakes, cake pops and whoopie pies.

*They actually tasted pretty good once sandwiched together with a new batch of butter cream filling, this time made just by replacing 1/2 a cup of icing sugar with 1/2 a cup of brown sugar and following my usual recipe from the good old Edmonds Cookbook.