It’s 8:15 on Sunday morning and there’s already a queue of at least thirty people waiting to get into the free ‘Art of the Novel’ session. It’s not due to start till 9am and by the time I’m half way through my coffee the line stretches round the corner and out of sight. The room seated 350 people and it looked pretty full by the time everyone was sitting down!

I sat between a very serious aspiring novelist and a group of younger chattier aspiring novelists. The men behind me were also deep in a conversation about writing and almost everyone had note pads.

Enter our three novelists. Stephanie Johnson from New Zealand, Emily St John Mandel from Canada, and from England came David Mitchell, wearing a pair of bright pink stripey socks, so I was immediately taken with him. His work is amazing too, of course, but the socks! 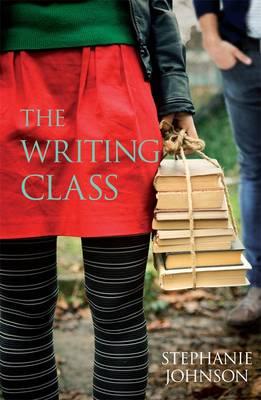 The session was roughly broken up in to three parts, the ‘pre-writing’ stage, the writing itself, and then the editing and publishing stage.

“Research is great procrastination,” Stephanie Johnson said, as the three of them talked about building up their knowledge before (or just as often, during) their writing. For her latest novel, Station Eleven, Emily spent a lot of time on survivalist forums, which was fascinating, but a little scary.

David Mitchell’s ideas for his next book circle around his head like planes in a holding pattern, waiting to come down. He seems to have a very organised mind, or at least his mental organisation system resembles a kind of organised chaos. Whenever he finds a second hand book he thinks might be useful for one circling plane or another he’ll buy it and store it away, with a bookshelf put aside for each potential novel.

David and Emily both agreed that they would get so sick of working on old novels that the thought of starting a new one was terribly exciting! The new ideas can get very flirty and pushy, so it’s a matter of keeping them under control while you slog through the final days of your current project.

Some great bits of writing advice came out of the session:

About letting ideas sit and stew:

“You do need composting time. It’s good to have at least a part time job that forces you out into the world to pretend to be a normal.” – Stephanie Johnson

“I have to write the novel itself to figure out where the novel is going… it’s an incredibly inefficient way to write a book really.” – Emily St John Mandel

About fear, and challenging yourself by stepping outside your comfort zone:

“I want to know that I’ve bitten off more than I can chew this time.” – David Mitchell

“I try not to think about the audience when I’m writing. Which audience member would I pick anyway? I write the kind of thing I want to read.” – Emily St John Mandel

“When you’re really writing and it’s going well, the experience shouldn’t be too different to reading, or knitting.” – Stephanie Johnson

“Sometimes I retype my entire draft, or read it all aloud. A ‘random page edit’ is a great way to pick up mistakes, print out and pick up page 3, 250, 180, whatever, and you’ll find all sorts of errors that you won’t notice if you read your story in order.” – Emily St John Mandel

“I don’t try to make it perfect the first time, that first draft is just about bringing a thing into existance.” – David Mitchell

“When we’re being odious ourselves, remember, we self justify. Have your villains do the same.” – David Mitchell

“No one is one hundred percent odious all of the time, or if they are, they came by it honestly.” – Emily St John Mandel

By ten o’clock it was clear that the audience would have stayed much longer but it was time to move on, or rather, move out into the signing queues for some quick one-on-one writing advice.

For the writers among us, do you have any writing advice to share?

The Lyttelton Harbour Festival of Lights is an annual event of lights, music and fun celebrating the Lyttelton community, Matariki, the Māori New Year and the winter solstice, the shortest day of the year.

The Festival runs over nine days from 13 to 21 June, and this year boasts two stages active throughout the night, on London Street and at Albion Square. The programme features a parade, masquerade balls, music, waiata, food and wine, live poetry performances, art exhibitions, and, of course, fireworks.

The following resources are helpful for Lyttelton visitors and locals:

The 2015 Festival is the eleventh time the Festival has been held. Read our post about the 2014 Festival and our interview with Wendy Everingham about the 2007 Festival of Lights.