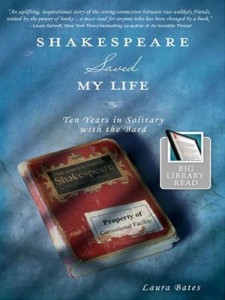 As of right now you can go to the OverDrive website and check out Shakespeare Saved My Life : Ten Years in Solitary with the Bard by Laura Bates as part of the Big Library Read. The Big Library Read allows unlimited check outs until the end of March on a selected eBook in OverDrive libraries the world over. For example, somewhere in Ireland a beautiful Irish Colleen is reading this eBook just as you could be! Cosmic!

The eBook itself looks fabulous. Kirkus reviews calls it:

An eye-opening study reiterating the perennial power of books, self-discipline, and the Bard of Avon.

Basically the eBook is about how a Shakespeare professor and prison volunteer called Laura Bates decides to teach Shakespeare in solitary confinement. Here she creates an unlikely bond with Larry Newton, a convicted murderer with several escape attempts under his belt and an agile mind on his shoulders. Thus begins the most unlikely of friendships.

Sounds brilliant. All you need is your library card number and password/PIN and you will have a happy alternative to watching that horrendous TV programme The Bachelor NZ which I definitely do not watch…

Kei mahurangi kē koe.
You are away with the fairies.

Taihoa kia hoki mai a Māmā.
Wait for Mum to get back.

24 March 1887
First City Council offices open. This building at the corner of Oxford Terrace and Worcester Street was designed by S. Hurst Seager. It was the first public building in Christchurch to break with the prevailing tradition of Gothic, Classic or Venetian style.