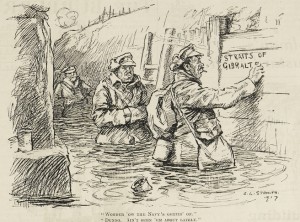 How did Punch, the world’s most celebrated magazine of humour and satire deal with the difficult subject of World War One? The Punch Historical Archive provides an interesting example of how comedy could be employed in a cathartic role against the fear and grief caused by the war on the home front.

When the war started Punch was very pro-war, making fun of some of the key figures in the conflict such as Austria and the Kaiser. As the war drags on though the imagery shifts from sharply satirical cartoons of a bloodthirsty Kaiser to a touching picture of a wistful Tommy in the trenches as the civilian population begins to get increasingly disillusioned. Punch took its lead from its readership as the war dragged on and the change in its content and world famous cartoons reflect this. Some said it started to stick to safer topics such as the social cost of the war with weedy degenerate shirkers and inappropriately dressed women (i.e. as men) who had entered the workforce becoming the new targets.

If you are looking for a different vision of World War One then this archive is a great place to start for researchers and students. Have a gander today and read through a magazine that aimed to keep the home fires burning in the most desperate of circumstances.

See our page on WW100 commemorations.