Are you having trouble being motivated to do your New Year’s resolutions?

Maybe you’re doing too much. Maybe your resolutions are all wrong.

This year I don’t feel I need to do more – but actually need to do less or at least do it more efficiently. Do you feel this way too?

Here’s some good titles to get you inspired to slow down and enjoy life:

Successful holiday programmes at South and Upper Riccarton had many happy children tasting new technologies and having lots of fun.

Summer is well and truly here so grab your bucket and spade…and spray bottle, masonry trowel, spatula, and books on sandcastle building and get down to the beach because you could carve out a sand sculpture at the Fourth New Zealand Sandcastle Competition! The competition is being held at New Brighton beach (right by New Brighton Library) on 7 February 2015. Also, buy yourself a beach bag, sounds like you’re going to need it for all that equipment.

While you’re at the competition, come in and visit the friendly folks at New Brighton Library and check out some fiction related to sandcastles. If you require some musical inspiration for your sandcastle efforts, Robin Sparkles sings the titular song of this blog.

For some pics from other Sandcastle competitions (including an alien crash on Easter Island) check out our Flickr album.

Looking beyond Gallipoli, an awful lot was happening in 1915. On the Western Front a number of major engagements took place throughout the year. The Battle of Neuve Chapelle, fought in March and April, was the first planned British offensive of the war. The attack had some initial success but ran out of steam.

Beginning on 22nd April – days before the Gallipoli landings – the 2nd Battle of Ypres saw Germans attack the salient (a bulge in Allied lines surrounded by German territory) around Ypres. This battle marks the first use of gas on the Western Front, the Germans having previously used chlorine gas against Russian forces on the Eastern Front. French Algerian and Canadian troops bore the brunt of this attack.

The Battle of Loos was the biggest British offensive of the year, yet once again initial success ran out of steam. Casualties were high, both amongst pre-war regular soldiers and those who had volunteered for the duration – this battle marked the first use of ‘New Army’ units on the Western Front. During this battle, the British used poison gas for the first time.

There was plenty of action in other fronts around the world. The Indian and British armies had had some success against the Ottoman Turks in Mespotamia (modern-day Iraq) in 1914, but 1915 saw forces over-extend themselves, and after defeat at the Battle of Ctesiphon in November the allies retreated back to Kut-al-Amara.

In October a Franco-British force landed at Salonika in Greece (now Thessaloniki) with the intention of aiding the Serbian Army against Bulgaria, an ally of Germany. Although the Serbians had been beaten by the time the force landed, they remained stationed in Greece.

Germany had various colonies in Africa and in 1915 there was ongoing fighting – often in very difficult conditions – in a number of these:

The Oscar winning film The African Queen is set during the East African campaign.

In British-controlled Egypt, New Zealand troops were involved in defending the vital Suez Canal from the Ottoman Turks and towards the end of the year helped to quell rebel Arab and Berber (the Senussi) tribes who had been agitated by the Germans and Turks.

In April 1915, William Rhodes-Moorhouse won the first ever aerial Victoria Cross, bombing a railway junction in Belgium. He died the next day aged 27. Although he spend most of his life in the UK he was descended from Wellington settlers and the iwi Ōtahui of Ngāti Ruanui.

Who will you be remembering this year?

Thanks for all your excellent suggestions on a name for the new library, pool and community facility in Halswell. We now have a shortlist. You can vote for one of these six options:

You can vote now until Sunday 8 February at www.ccc.govt.nz/YouNameIt. The person or people whose suggestions get the most votes will receive a pass to any Christchurch City Council pool. The announcement of the winning name is scheduled for March, when the results will go to the Riccarton–Wigram Community Board for the final decision.

Read the media release: Pick your favourite name for the new Halswell facility 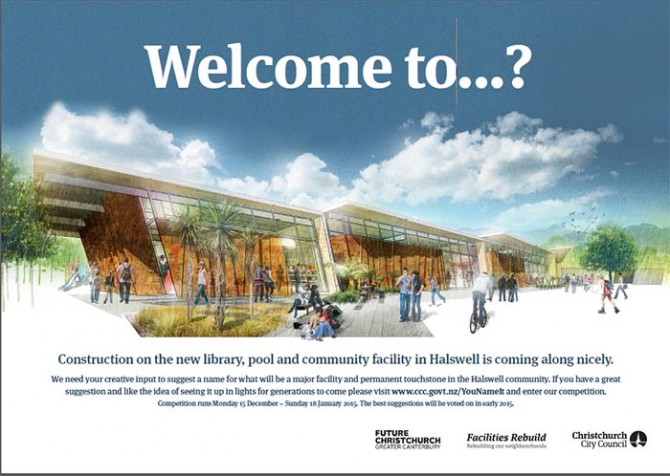 is a ten day festival that kicks off on Waitangi Day with the latest incarnation of the popular One Love festival: One Love Waitangi Day Sound System at Albion Square.

One of the big events for families is The Big Pirate Picnic Beach Party:

If you team that up with the Pirate Farmers Market, Corsair Bay beach clean-up and a visit to Lyttelton Library, you’ve got a great Saturday planned! 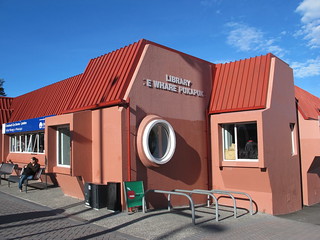 See the full programme on the Lyttelton SummerFest site. 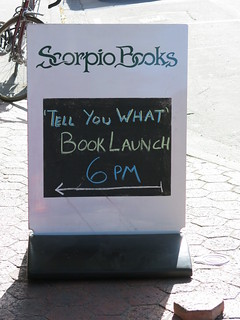 Last night there was an event at Scorpio Books in Christchurch to launch Tell You What: Great New Zealand Nonfiction, 2015.

It was a bit of a homecoming – the origin of this book was co-editor Jolisa Gracewood in Connecticut observing Christchurch after the September 2010 earthquake. Her eagle eye took note of some great writing that our earthquakes “shook loose”.

Contributors Megan Clayton, Lara Strongman, Nic Low, and David Haywood read a sampling of their essays. We heard about birth, about messages from the past to the future, about Ōtautahi loosing itself, and ratty haircuts.

Each tale and teller different, unique. But in all of the stories, you felt the personal and the universal.

Tell you what is an omnium gatherum of great recent New Zealand writing, mostly from out on the Web. If you wanted to compare it to food – you could say a degustation or tasting plates – but actually the essays are more substantial than that. Each piece is a complete meal and you can dip in and read, or devour it cover to cover (I did the latter). It features Eleanor Catton, Elizabeth Knox, Tina Makereti, Steve Braunias, Naomi Arnold, snails, cycling, gardens, Kim Dotcom, and Rihanna’s tattoo.

It is a great book. Read it.

. @TellYouWhatNZ is one of my top reads – looking forward to hearing authors & editors LIVE tonite at Scorpio http://t.co/C20v7wSdOk ^DR 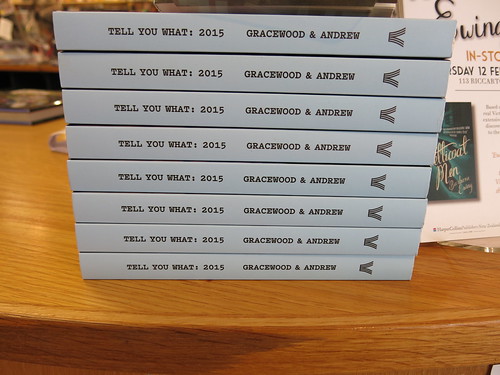 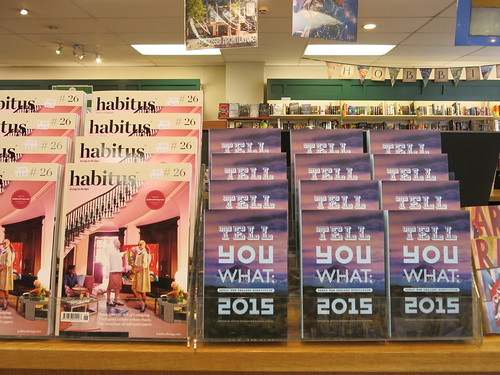 Morrissey is one of the most provocative and polarizing musical personalities there is – He’s idolized with a cult following. Many seem to loathe him. And many (like me), like and dislike him at the same time.

Morrissey has a ‘rep’ for winding people up with his inflammatory statements and no one is excluded from his critiques regardless of how important or well liked they are – The Royals (his “We hate Will and Kate crusade), other artists (calling Madonna “McDonna”) and general irreverence whatever the subject or personality.

That’s why his autobiography was such an anticipated read … Oh yeah, also the fact that his band The Smiths, was one of the most pioneering musical acts ever – arguably conceiving the Indie sound/genre, or at least being very influential in the indie-rock scene.

Typical of most things Morrissey, his book immediately elicited a controversial response from book buffs as it was published as a Penguin Classic. This roused literary people to storm the gates of Penguin or take it to the internet. One reviewer has referred to the work as Morrissey’s “droning narcissism and the whine of self pity”, however, I feel this is more a response to the persona than the pen-work, as Morrissey possesses a knack for writing that most musicians (and writers) don’t.

His autobiography begins with funny and sad insights into the many and varied aspects of his life, much of which has little to do with his and guitarist Johnny Marr’s song writing success. There are the subjective details and impressions of life growing up in “forgotten knife plunging Manchester” in the 1960’s, where “the birds abstain from song”, the “1960s will not swing” and the alleys “have cracked under duress like the people who tread them”. Sounds depressing but provides a well articulated, intimate and almost sociological picture of rough industrialized 1960/70s England which makes me feel very grateful for growing up in this verdant city.

The rigid, hyper-authoritarian education system of the 1960s is also illuminated with funny treatments – he was among the unwashed pickpocket children under the authority of Headmaster Coleman who “rumbles with grumpiness in a rambling stew of hate”, the “bearded nun who beats little children” and other teachers who will “die smelling of attics”. Perhaps an exaggerated recollection but one that no doubt provides echoes for people who were caught up in the system of the time. Morrissey portrays Manchester life as seemingly soulless, forever wet and working class, which he laments over throughout the first thirty pages with singing possibly the only way out.

Beyond this Morrissey discusses all manner of subjects: his musical influences, poetry, his sexuality and romantic interests (subject to speculation over many years due to his self -proclaimed asexuality), his acrimonious relationship with his record company Sire and then there is the bitter and drawn out recollections of a court case involving him against other band members – I found this hilarious, however, other reviewers dismiss this portion of the book as being a highly subjective rant void of self scrutiny. But who would really know?

Adding to the texture of the book are his various interactions with other famous people – David Bowie comes up a bit and is referred to disdainfully as “flesh eating Bowie” (due to Morrissey’s ardent vegetarianism). He states candidly that Margaret Thatcher should have been assassinated, which is no surprise given his song “Margaret on the Guillotine”. Other musical and political figures are given a beautiful or brutal treatment depending on his preferences.
If you like music, give this a read. If you like The Smiths or Morrissey, its a must. It might make you angry, or it might make you laugh. Or in True Morrissey fashion it will probably do both.

He huaparaunoa
pack of lies

He taone nui a Poihakena.
Sydney is a big city!