The Press has been helping former Canterbury University fine arts student Hamish Thompson identify the “retro shopkeepers” he took photos of in 1977.

Thanks to you eagle-eyed Christchurch and ex-Christchurch people, all of the shopkeepers and their shops have been identified except for the following two – this young lady (in her scarf, and un-scarfed, and the older lady below in her second-hand shop. Any ideas as to who they are – and what and where their shops are???

You can see all the photos here on Kete Christchurch.

This awards ceremony starts with the winners. My two favourites of the year:

Sam Zabel and the Magic Pen by Dylan Horrocks. I could have picked any of Dylan’s four covers represented below. The man is a massive New Zealand talent, and deserves all the kudos. Onya Dylan.

Creamy Psychology
A survey of the work of photographer Yvonne Todd. Artists and photographers – like cartoonists – often have a head start when it comes to good covers. They have the images. And this is hypnotically creepy and yet alluring. Love it, and the title.

Let’s continue the awards ceremony with two strong Christchurch-focused titles. Potently distinctive, and both representing well what is inside.

Last year I praised the array of fantastic cartoony covers on New Zealand books. I’m pleased to see more goodies this year. I feel like a Dylan Horrocks cover is so damn good, and generally indicative of an excellent book too. Two of them this year are his own collections.

More proof that artists give good cover. As do poets.

Some super covers for kids and teens.

There is a boom of publishing in the area of First World War history. This has an appropriate solemnity and gravitas. As do some others employing black and white photography.

I love this one. Love love LOVE.

A lineup of stuff can make for an attractive cover.

Book of the year. But though the cover is distinctive and recognisable (it looks a bit like the Shroud in Turin?), I kind of wish it had a Sharon Murdoch cartoon on the cover. She is on Twitter as @domesticanimal and is all kinds of awesome.

Come along to share your ideas on the new Sumner community facility at the Sumner Union Church Hall, corner of Hardwick and Nayland Streets – Sunday 23 November, 10.30am-1.30pm.

The first session is at 10.30am if you are keen to join a group and contribute your ideas to the concept design or if you just want to hear what others have suggested come to the second session beginning at 12.30pm

Christchurch City Council is holding the workshop to give you the opportunity to develop, share and discuss ideas for the design of the new facility.

The ideas will be considered by a Joint Working Group being set up to help with finalising the concept design for the new facility. The new facility will incorporate a library, community and museum space. It will be built on the site of the demolished facilities in Wakefield Avenue.

Find out more on the Future Christchurch site. 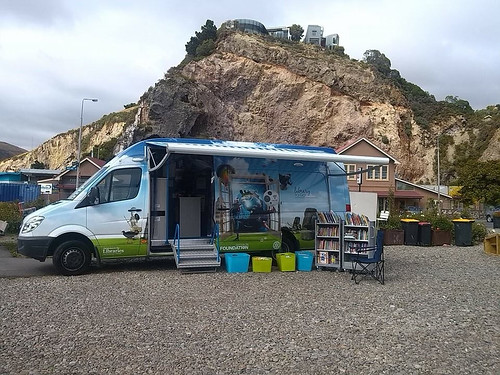 When you see a book titled The Next Decade, it’s hard not to be drawn to it. Such a title appeals to that human desire to know the future, and as the title implies, that’s what this book is about.

But while sounding somewhat prophetic, it’s not – it is “forecasting”, or more specifically “geopolitical” or “strategic forecasting” which is the subject of this book. Dr George Friedman – a geopolitical analyst, International Relations expert and Chairman of the think tank Stratfor.

This book discusses what will take place over the next decade throughout various regions of the world. It is a commentary on economics, resource-related conflict, terrorism, historical tensions, power struggles, and armed conflict – which are usually tied together within various geographical or regional theatres. It’s an attempt to predict, through a series of highly-educated guesses:

The “who” mostly being countries, while giving some treatment to “non-state actors” such as terrorists.

This book is highly America-centric. It views issues through the lens of American geopolitical concern and primarily deals with what the USA will have to do to maintain its military and political ascendancy as a globally far reaching “unintended empire”.

Further to this, Friedman puts a blatant Machiavellian spin on it and advises that American foreign policy must employ cunning economic and military tactics: who to side with, who not to, regional balances of power, which regions to invest in, which ones to stay out of (for example, the USA should strengthen Poland so as to create a buffer between Europe and Russia). Additionally, the USA should continue to engage Australia and ensure a stronger partnership so as to counter-balance Asian and South East Asian regional influence.

Interestingly, Dr Friedman suggests the White House should also get friendlier with Iran – because they are the primary regional power in the Middle East.

What Friedman really understands is also what makes this book so compelling:

This is a good introduction to strategic geopolitics for anyone not really familiar with international relations and global politics, and it indirectly teaches you how to think like an analyst. It also provides a good read for those familiar with the subjects of war, history, economics, international relations, and resource-related conflict. It’s a timely read, especially as Europe is contending with a seriously unstable Africa and North Africa, Middle East and Eastern Europe – all right on its doorstep(s).

I was going to say that “the times they are a changing”, but actually, they are not, the fundamentals of geopolitics haven’t really changed. The book probably sounds like a yawn created for political/war geeks, but it may provide compelling reading for all sorts of people. Have a read. It’s enlightening.