On the 1st of November the Mexican community came to Upper Riccarton Library to set up a Dia de los Muertos display. On this day throughout Mexico and, to a lesser extent, in other parts of Latin America, people celebrate Dia de los Muertos: Day of the Dead. That’s right, celebrate – as they understand death not as an ending, but as a pathway. 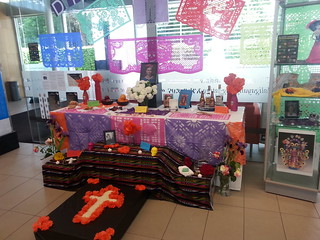 In homes, people create altars to honour and remember their deceased loved ones, and families and friends gather to remember and reminisce by welcoming the opportunity to reflect upon their lives, their heritage and their ancestors. The day is all about love and happiness, not fear and sadness.

This year the display at Upper Riccarton Library was around Frida Kahlo as she is one of the best known Mexican people in the world.  It has been a total success, with heaps of people stopping to look at it and asking questions. We ended up learning that many countries in the world have similar celebrations… it is a small world after all!

Does your culture celebrate a festival similar to Dia de los Muertos?