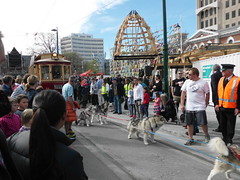 When I saw that the grand opening involved sled dogs pulling a tram, I decided this was a must for the Young Lad, so despite the familial protest that 9:30 was too early for anything on a Saturday, I took him along – leaving Miss Missy and Mr K to enjoy their lazy Saturday morning.

I thought we’d be there for half an hour tops, but little did I know what fun awaited us at the IceFest Hub! First the excitement of seeing the tram being pulled by the team of dogs. Then the wonder as a block of ice was slowly turned into a beautiful sculpture of an emperor penguin feeding its young (not a kangaroo as the Young Lad suggested). 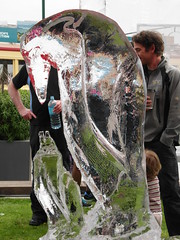 Well, the wonder was perhaps more on my side: while I enjoyed being dusted with snow, Edward Scissorhands style, and watching the sculpture slowly taking shape, the Young Lad joined the general hilarity of kicking chunks of ice around with the other children.

We then listened in as the guys at Scott Base were asked about snotcicles and what happens to the poop (it is frozen and sent to New Zealand for processing – who knew?!), topics sure to delight the boys in the audience.

IceFest is on until 12 October and you’re sure to find something to interest you, from the serious to the hilarious. There will be experts talking about climate change, movies and clowns for the kids, and, if snotcicles are your thing, there are plenty more opportunities to talk to Scott Base.

You probably know the story of the Twelve Dancing Princesses. Twelve sisters disappear at night and come back with worn out shoes — where have they gone? The father offers a reward for anyone who can solve the mystery.

The mystery of The Girls at the Kingfisher Club has already been solved. A father, determined for a male heir, perseveres until he has twelve daughters living on the top floor of his New York apartments. Twelve sisters, aching for freedom, slip out each night to whatever Manhattan speakeasies seem safest. The story mostly follows Jo, the General, but also manages to capture the disparate personalities and hopes of her eleven younger siblings.

While I loved the historical element of this book (1920s New York!), the characters really steal the show. One of my favourite moments was when the father, stern faced and suspicious, confronts all twelve daughters for the first time. Suddenly he’s vulnerable in the face of his own offspring, especially Jo, trained by necessity to guard and look over her sisters and constantly worrying: am I my father? She certainly shares his iron will, his strength and his stubbornness, but while her father uses his power to cage others, Jo uses hers to set her sisters free. The sisters aren’t perfect by any means; they squabble and hate and love each other equally, living together with an invisible line marking each sister’s territory. There’s loneliness on that crowded floor, but there’s also a connection between prisoners that never really fades.

She was still trying to discover how people related to each other, and how you met the world when you weren’t trying to hide something from someone. It was a lesson slow in coming.

If you’re thinking this doesn’t sound like a light read, you’re right, but it’s worth it for the elegance of Genevieve Valentine’s writing, and watching twelve princesses free themselves while carrying their shoes in their hands.

All copies unavailable? Try these similar titles which I also wept over: