Both have recently had books published on these topics and provided some interesting insights about the nature of inequality and poverty in NZ.

Unless you have been hangin’ with the Taliban in a cave somewhere in the arid Afghani wilderness, you’ve probably been hearing lots about the political and economic topics of Poverty and Inequality in New Zealand. Particularly Child Poverty.

Poverty and Inequality are labels which Kiwis probably never thought would be applied to economic and social life in our precious little liberal democracy here in the South Pacific, besides, as long as we have alcohol, rugby, league, cricket, Richie McCaw, hair straighteners and sunny summers, then everything else just seamlessly plops into place right? Well, um, no. Not really.

The reality of inequality in New Zealand is a bitter pill to swallow, and after years of seeing the adverts of aid organizations on TV depicting skinny and deprived children born into environments of famine or conflict (or both) throughout the world, people seem to find it insulting to hear we have poverty here.

Maybe whoever started the discourse on poverty should have given it another more palatable title, like, um, Chronic Economic Deprivation, or Ongoing Financial Insufficiency, but chances are people wouldn’t accept this either. Perhaps its because poverty and inequality are hard things to define and measure , and we can probably blame academics for providing too many working definitions with no continuity. However, one place to start is with the assertion that in the last 30 years in New Zealand, “incomes for people at the top 10% have doubled, while those at the lowest end have barely increased” according to Max Rashbrooke’s website Inequality.org.nz.

Both Dr Hayward and Mr Rashbrooke point out that much of what we see now in terms of inequality can be traced back to around 30 years ago, when we were told by various economists that “a rising tide will lift all boats”. Basically, the Labour Government, under the financial direction of Finance Minister Roger Douglas, drove us into an era of “Neo-Liberalism” (or “Rogernomics”) which “rolled back the State” with a program of deregulation, the removal of government subsidies and tariffs to various sectors of the economy (such as agriculture), and other key changes.

One significant change was to reduce the marginal tax rate from 66 cents in the dollar to 33, and as taxes were cut for the top earners in the country (with those at the bottom paying more via GST etc) we were hoping that those enjoying the “rising tide”, such as businesses and top earners paying less tax and facing less outgoings, would have more money to throw around and people at the bottom end would be employed and paid more as a result. However, income disparity and inequality has arguably increased ever since.

Both Dr Hayward and Mr Rashbrooke contend that the issues we are facing now in New Zealand (and other parts of the world) are fundamentally manifestations of these “neo-liberal” economic policies, and that there are two key dimensions to the inequality/poverty issue:

A. People have less to live on than ever, and everyone in society is paying the price regardless of how well off you are, due to crime and mental, emotional and physical health issues which affect us all.

B, richer people with more discretionary income enjoy a higher degree of political agency than the rest of us because they have more time, money, resources and connections through which they push their economic and social preferences at us all via lobbying government.

Its hard to get a clear picture on all this, as there are a plethora of indicators and measures relating to the subjects of poverty and inequality in New Zealand, however, some findings do suggest there was some positive change in NZ for a period, which some political and economic commentators point to as progress, confusing us all the more.

From a longer term perspective, median incomes fell in real terms from the late 1980s to a low point in 1994, and have been steadily rose at an average of 2.5% pa. By 2001, the median income had just returned to its 1988 levels.

The MSD goes on to state that on all measures, the poverty rates for children declined from 2004 to 2007.

– In 2004, of all children identified as poor, around half were from households where at least one adult was in full-time paid employment – in 2007, this proportion had dropped to just over a third.

Interestingly, reported information from other OECD countries shows that with the child poverty rate for New Zealand being around 15.1%, New Zealand has a ranking of 20th out of 30 countries, a rate a little above the OECD median (12%) and similar to that of Ireland, Germany, Canada and Japan.

Which leads us to another thing.

New Zealand entered into recession in 2007/8 before the Global Financial Crisis (GFC). So, in a way we arguably led the world in economic mismanagement. Further to that, according to the NZ Treasury’s 2008 Pre-Election Economic and Fiscal Update, the effects of the GFC started to set in to the New Zealand economy. And then there were the Canterbury earthquakes. So, the perfect economic and social storm began to ferment over N.Z., and the economy and the citizens which dwell therein have been layered and laced with economic hardship for which few of us, or our government, seemed prepared. This caused the progress in poverty and gains in the median household income (which fell by 3% in the space of a year in 201-2011) to go backward according to the MSD, and this at the worst possible time when the price of many key essentials (housing, food, petrol) has gone up markedly in a small space of time, according to Statistics New Zealand.

Therefore, while there is debate about the nature of economic deprivation in NZ, what has become clear is that despite fluctuations in household incomes over the years, when Kiwi households do experience (internal/external) financial and economic shocks, poorer households are not insulated from such problems in the same way that the rich are. And it doesn’t take long for things to go sour for many of us.

For a more in depth picture of what’s going on, be sure to check out Bronwyn Hayward’s and Max Rashbrooke’s books and other works.

Best picks, reader advisory, book recommendations, what’s hot, whatever you like to call it, sometimes the best reads come from someone else’s sharing. 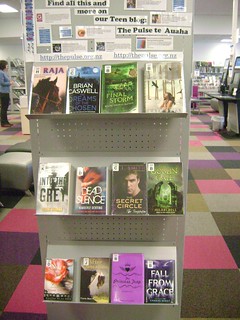 Luckily there are librarians with a passion for the Young Adult (YA) collections in our libraries. We spend our spare time engrossed in books that we love to share with our rangatahi and teenagers to encourage a lifelong love of reading. “Young Adult” in library speak defines collections aimed at around 13-19, BUT, I challenge you NOT to let that dissuade you from venturing forth.

Anyone who loves a great read and is open to alternatives, a change, and a specialised writing style should have a browse and see how often you go WOW!  I say ‘specialised’ because I would suggest that good YA writers have nailed the need to hook our young adults in with powerful writing skills, great story lines and immediate attention grabbing techniques.

Therefore, with all this in mind, at a recent meeting with colleagues who have this passion and carry some responsibility in their libraries around the YA collection, we all shared what we had been reading recently. This is a very diverse list and we hope you find something that will encourage you to give a YA title a go or will provide some help when you are being your teenager’s personal librarian.

The following titles are found in our Young Adults’ collections in your library; some are available as free downloadable e-books and audio-books as well.

As with life, books are difficult to put in specific boxes: these titles are from the ‘adult’ collections, but may well appeal to older teenagers.

So, whether you are up for a challenge or are tearing your hair out to get your offspring to read, there is something for everyone in the Young Adult collections in our libraries.

Let us know how many times you went WOW!

It is about this time of year that the Selection Team starts getting notification of what items are coming out for the Christmas market. Recently we attended an evening where publishers presented their choices for Christmas high flyers.

Jodi Picoult was top of the list with her new title Leaving Time. It was billed as one of Jodi’s most powerful and affecting novels yet… This seems to the general hype for all her books so it will be interesting to see what she comes up with in this tale of a daughter searching for her missing mother.

The Burning Room by Michael Connelly sees the return of Harry Bosch. We were informed as an aside  that Michael Connelly is the nicest man you could ever meet!  I’m not sure what this has to do with the quality of his writing, but it was oddly nice to know.

Russell Brand, famous for his quick wit and even quicker marriage to Katy Perry, has produced a children’s book called Trickster Tales: The Pied Piper of Hamelin. I thought it looked great and will probably be buying this for someone – if not for myself.

The festive season always requires an uplifting tale of  triumph against the odds. Long Shots is a New Zealand title of inspiring sporting heroes and Love Without Limits follows on with the story of Nick Vujicic as he meets and marries his soulmate. “If you can’t get a miracle become one – no arms no legs, no limits”.

Two doctor stories feature this year: Working Stiff, the memoir of a young forensic pathologist, and Being Mortal, a doctor looking at death, dying and medicine. Not my idea of a light Christmas read, but there you go.

Christmas reading wouldn’t be the same without the obligatory cooking books. River Cottage Light & Easy features a slim line Hugh Fearnley-Whittingstall on the front cover. I think I prefer him hairy and chubby. There are also two expensive titles, Sepia and Organum, that were presented as “cookery books that you would never cook anything from”. Seems to defeat the purpose of a cooking book, however they did look pretty.

For the history buffs amongst us, Queen Victoria features in The Queen, Her Lover and the Most Notorious Spy in History – “an unbuttoned history of Queen Victoria’s loves and intrigues” – and in the less salacious Victoria: A Life by the respected historian A. N. Wilson.

Two of my favourite children’s authors feature this year.  Libby Gleeson with The Cleo Stories: The Necklace and the Present and Alison Lester with Noni the Pony Goes to the Beach. Both look great.

Which of these titles would you like to find in your Christmas stocking?