Secrets, spies, and free speech was stunningly topical, and the chair and panellists were knowledgeable and articulate, and pretty funny to boot (I actually got sore cheeks). Discussion ranged around ideas of surveillance, free speech, state control, spying and shutting down debate.

Luke Harding is a Guardian reporter who was written on Edward Snowden and the National Security Agency; Nicky Hager is headline news for his investigative work in Dirty Politics; and Richard King’s book On Offence argues that free speech is meaningless unless it includes the freedom to offend. Joanna Norris, editor of The Press chaired the session – most appropriately as she is also the chair of the Media Freedom Committee.

Luke is concerned about mass surveillance and how information is “all being hoovered up and analysed. The rise of authoritarian states has seen state actors trolling individuals, armies of cyber bloggers causing people to retreat and exit from the conversation.

Edward Snowden gave his information to responsible journalists. He is an epochal figure, part of the “biggest, most important story of the 21st century”. Working on this story was fraught. There were incidents of mysterious workers laying down cables outside his work and home, and occasions where the text on his screen would mysteriously delete.

Of the famous laptop smashing incident, Luke said it was “half Stasi, half pantomime”.

Richard King had plenty to say about the Australian situation, and bigotry. He reckons “bad speech” should be allowed but we should “call out the bigots and haters”. Beware “the great steambath of censoriousness”:

On questions of principles, slopes are always slippery.

King was a master of pithy and revealing observations”

Julian Assange is the tiny elephant in the room.

The claim that something is offensive is taken as an argument in itself.

Nicky Hager classed himself as a moderate in the surveillance debate, seeing the need for monitoring those who could hurt people. At the same time he thinks society’s fear about surveillance is insidious.

He said of leaks: “There is nothing special about a leak being illegal … people are going to feel intruded upon”. Most material didn’t meet the public interest; he stripped out names from some of the source material before publishing it.

We have a government that was faking; manufacturing a sense of friendly, “she’ll be right …”

while major New Zealand corporates were paying to have opponents – including those in public health – smeared.

Politics is so much easier for your side by destroying opposition. It is really East Germany.

He was sharp and funny, explaining the process of how Dirty Politics came to be. Meetings in parks, and an initial plan to tweet out whole blast of information (Whaledump being in the news again today of course).  His source’s motivation is simple:

Whale Oil is a bastard and let’s do him over … he’s a prick”.

Fiction is one of the places we can go to experience real closure.

WORD Christchurch Writers and Readers Festival was a place for hometown heroes and heroines as well as international stars. Eleanor Catton was one of the highlights of The Stars are out tonight. She read from The Luminaries in a piece that included my favourite quote (page 502 Luminaries nerds): ‘I suppose that to know a thing is to see it from all sides’.

On Saturday 30 August, Eleanor was in conversation with Kate De Goldi in front of a packed Cardboard Cathedral. Here are some of the quotable quotes from this interesting session:

The Luminaries is the reverso Murder on the Orient Express. 12 people but none is the perpetrator. #wordchch

The grand choreography of The Luminaries – every single character’s relation & interpretation of events is partial. #wordchch

“The most holy of all units is the paragraph.” Eleanor Catton #wordchch

Eleanor Catton took about 4 hours for a paragraph. Three paragraphs was a good long day. #wordchch

Fendalton Library gets a shout out from Eleanor Catton. We’re not worthy! #wordchch ^DR

“There is something scary about a woman who wakes up to herself”. @EleanorCatton on why heroines in Victorian novels often die. #wordchch

The lovely criminal duo of  Yrsa Sigurdardottir (go on do have a try…ỨR-suh SIG-ur-dar-daughter..easy!) and Liam McIlvanney chatted with Crime Watch blogger Craig Sisterson.

Liam McIlvanney was scheduled to appear in the 2010 Press Christchurch Writers Festival but the Darfield Earthquake put the kibosh on that. Four years later he has published the second in his Gerry Conway trilogy Where the dead men go and recently won the 2014 Ngaio Marsh Award for Best Crime Novel.

The panel talked at length about the importance of setting in crime fiction. Liam uses Glasgow, the crime capital of Western Europe, as his backdrop and believes Scotland’s history of dour Calvinism has developed into a dark obsession with sin. Scotland’s complex relationship with England particularly prior to devolved power has also allowed crime writers to pose politicised questions about wider society without the necessity of providing answers.

Yrsa acknowledged Iceland’s unforgiving climate lends itself to the idea, if not the reality, of murder. With no real crime to speak of in the Iceland she has to work hard to make her fictional crimes seem authentic and uses social and political context “to add meat to the bone”. Yrsa also plunders Iceland’s long-standing fascination with the supernatural to great and creepy affect.

Both Liam and Yrsa hold down day jobs; Yrsa is an engineer working in hydro-electric generation while Liam holds the Stuart Chair in Scottish Studies at Otago University, an academic occupation which could be viewed as “boring and nerdy” but which allows him time to write about evil and achieve cathartic release.

Not particularly dark or chilling but instead a rather cosy and engaging peek at the craft of crime writing. 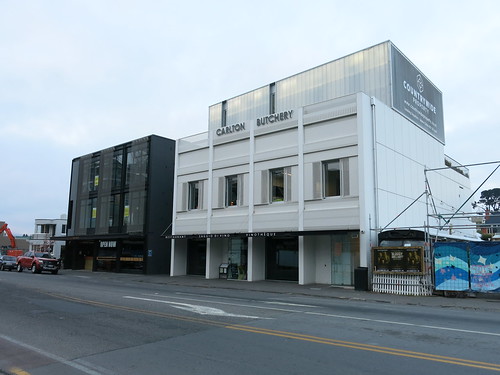 Two of my favourite things about literary festivals are: to hear authors read from books, and to find out what their best loved reads are. Reading Favourites was a WORD event that ticked both those boxes for me.

The three authors were Kate de Goldi, Sarah Laing and Carl Nixon and they were asked to name their two favourite New Zealand books. Guy Somerset hosted this event, which he wistfully billed as being: “like an Uber Book Group without the wine or cake.”

Sydney Bridge Up-side Down by David Ballantyne, a book about which she confesses to be somewhat evangelical. Published in 1968, it is a book that “keeps finding its readers”. It was, according to de Goldi, way ahead of its time.

Kate’s second choice was Welcome to the South Seas by Gregory O’Brien, a book de Goldi classifies as Creative Non-Fiction. It is a book that awakens the child in you, that grandparents buy for their grandchildren and end up keeping for themselves. It has the artwork asking you the questions.

Hicksville by Dylan Horrocks topped Laing’s favourites list. She has read this graphic novel several times and never tires of its multi layered approach. With each reading she seems to uncover more and more.

Sarah’s second choice was From the Earth’s End – The Best of New Zealand Comics. Sarah reminded us that after the war, 47 comic titles were published every month in New Zealand alone and that libraries are the guardians of much of this early material.

Carl’s first choice was The Day Hemingway Died by Owen Marshall. It was the first book (at 18 years of age) that Carl remembers wanting to read as if he had discovered it all by himself. It has a very distinct tone, is the perfect illustration of character foibles and is laugh-out-loud funny – all at the same time.

Carl’s second choice was Gifted by Patrick Evans. He read a wonderful extract from this book about the meeting between Sargeson and Janet Frame, two people who never really understood one another at all, according to Carl. This book never received the attention that it deserved and Carl hopes that we will rectify that by getting out there and doing it justice.

This was a well presented, varied event in which the participants gave us a peek into their best-loved books. And, to top it all, it was free. That is correct, there were a number of free events at the festival, and the calibre of all events is very, very high. So, in two years time, even if the budget is tight and penury looms (and I do so hope this will not be the case), you can still tart yourself up, hitch a ride down to the Fest and recharge those tired old book-loving batteries.

Then, and now. It is strange how things blur, what you forget, and what you remember.

It was shake, awake, get out, fear, and heck, is everyone ok? And wow, there is the chimney all over the backyard.

The same spot on Victoria Street is now home to a lineup of the new Christchurch – Smash Palace, etc.

This blog proved to be a handy place from which to share information. Our first library blog post on 4 September 2010:

In the days to come, there was so much to see and discover.  We entered into a new shocking and aftershocking world.

Of all the post September quake-related sights, one I will alway remember is a moment of rare delicacy, when the worker used his machinery to lift a chandelier, which he then passed to the owner. All of us watching cheered.