Let’s talk about that much-maligned beast, the supernatural teen romance. No, not sparkly vampires and werewolves and love triangles. I’m talking about romances that pretend to be something else, self-aware and awkward and occasionally grumpy. Love where there’s no romantic comedy Big Understanding, just characters growing together over the course of the book, facing their own hardships and taking it out on each other. Characters who help each other but still work for their own solutions, and who change without changing into a Romantic Entity. My favourite romances occur in the margins of the plot, so it’s no surprise that Margaret Mahy’s The Changeover hits all the right notes for me.

Laura Chant knows the morning the book begins that something’s going to happen — she’s had a Warning, just like the morning before her dad left — but her Warning is brushed aside in the chaos of breakfast and getting her little brother Jacko ready for the day. Laura’s mother Kate needs to leave for work and has no time for feelings of doom, and Laura herself half forgets once out the door. You’ll be shocked to learn that there is an incident with the superbly creepy Carmody Braque later that day, and that Jacko’s health starts deteriorating with supernatural rapidity. Obviously it’s up to Laura to stop Jacko being leeched away, and who else can she turn to but teen witch Sorensen/Sorry Carlisle? Sorry tries hard to be Tall, Dark and Mysterious, but let’s pass over the Twilight comparisons please because in trying he’s funny, which is not an adjective I would ever apply to Edward Cullen.

I’ve described The Changeover as a romance — well, that’s what it says on the cover — and while I do enjoy Laura and Sorry’s confused romantic tension, to leave it at that is to do the book a disservice. Yes, Laura and Sorry’s fledgling friendship makes me laugh, but Laura’s relationship with her mother, Kate, is also warm and real and occasionally laugh-out-loud funny; Laura’s reaction to her mother’s new boyfriend is predictably conflicted; and her feelings for little brother Jacko are key to the whole plot. His sudden magical illness is frightening and inexplicable the way illnesses at that age usually are, and while Laura is determined to fix it, the solution is by no means guaranteed.

Do you, too, like humorous quirky fantasy with awkward romance? Maybe you will be interested in listening to others discuss The Changeover! Join Stuart McKenzie, co-writer and producer of the forthcoming Changeover movie, and young adult writers Elizabeth Knox and Karen Healey, as they discuss with children’s literature specialist Bill Nagelkerke the importance of this great teen novel and its ongoing relevance.

As a lover of the smell of books, I smiled at the introduction to this session about Shigeru and the new book on the Cardboard Cathedral:

Word. This session was a conversation between Shigeru Ban and the book’s author – Dr Andrew Barrie Professor of Architecture at the University of Auckland, formerly based in Tokyo. It covered Shigeru’s architectural career, his humanitarian focus, and his work on our own Cardboard Cathedral. He also revealed his rugby playing past, happily using the laser pointer to show which young player was him.

The session had great visuals – photos of Ban’s work, plans, and a fabulous timelapse of the Cardboard Cathedral taking shape.

Shigeru went to the United States to study architecture and his career blossomed from there.

Shigeru talked about architecture as a job mainly working for priviliged people:

They hire us to visualise their power and money in monumental architecture … Architects are lucky people, always working with people who are very happy.

He was interested in materials early on. In seeking out a replacement for timber, he tried paper tubes and found them to be much stronger than expected.  A lovely visual of a toilet contained within a paper tube structure came onto the screen, and he smilingly admitted you could use the walls for toilet paper if you needed.

He isn’t keen to any claims of being an ecologist or environmentalist, saying simply:

I hate to throw things away.

His humanitarian career started in 1994 with the crisis in Rwanda, when he wrote a letter to the UN High Commissioner for Refugees offering his services. When no reply was forthcoming, he went anyway and worked on shelters costing $US50 each.

After earthquakes, he built a church in Kobe (Japan) and worked in China and Italy. He expressed the importance of providing comfortable and beautiful spaces to people who have been damaged physically and psychologically by earthquakes.

After Christchurch’s earthquake in February 2011, Shigeru was contacted by Craig Dixon of the ChristChurch Cathedral who had seen the paper church in Kobe. Shigeru agreed to work on the project pro bono, as long as the Cathedral could be used by the public.

Shigeru noted that the Cathedral in the Square is one of the most important monuments for tourism. He used its proportions, analysed its geometry, in his design of the Cardboard Cathedral. The process wasn’t easy, not least finding a site. He kept getting new sites, and having to redesign.

Shigeru Ban is quite an astonishing person – extraordinarily talented, but also kind, modest, and a thinker:

What is temporary? What is permanent? … Even a temporary building can be permanent. It depends on whether people love the building ot not. 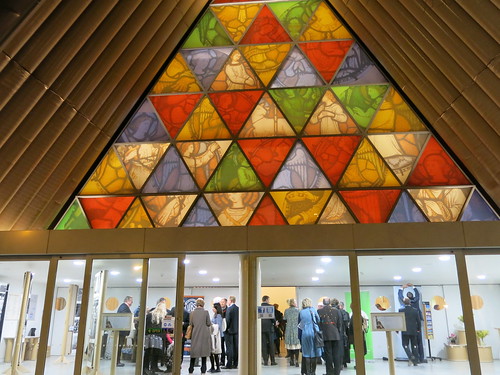