The body of a middle-aged woman was found in a hollow in Victoria Park, below the tearooms about 4.00 pm yesterday. An arrest has been made and a charge of murder will be preferred in the Magistrate’s Court this morning. The woman was Honora Mary Parker, aged 45, of 31 Gloucester Street. Her body was found by the caretaker at Victoria Park. He reported the discovery to the police. (Woman’s body found, Press, 23 June 1954, p.10.)

Pauline Parker, 16, and Juliet Hulme, 15, were found guilty of killing Pauline’s mother Honora Mary Parker with a brick in a sock. The murder took place on 22 June 1954. The jury rejected a plea by the defence that the girls were not guilty on the grounds of insanity.

This year it is 20 years since Heavenly Creatures – the movie about the murder – was released. Lots of Christchurch people have a connection to the movie, mine is that my sister sung in the choir you hear at the start.

Our website has digitised content from Christchurch newspapers at the time of the trial and articles written since. 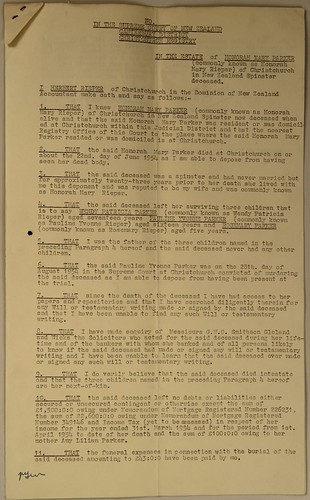