You did know there was an around the world bicycle race on at the moment, didn’t you? No, I thought not, unless you happen to be one of those strange people who like long distance endurance events, and even  then you probably stick to multisport events that finish in approximately the same week as they started. However, cycling around the world – and doing it as a competition with others – must stand as unique in the slightly sweaty annals of willing self torture.

My dears, lets not get started on what the chafing must be like. Have I piqued your curiosity? You can read all about it and follow the riders on www.worldcyclerace.com, where the remaining riders struggle through deserts and across the tundra, pursued by bears, no doubt. And mosquitos the size of bears.

And the reward for all this effort? Well, there isn’t one, apart from an impressive rash, really big mosquito bites and some blisters in places you wouldn’t want to show your mother. There were 4 starters this year, as compared to 11 last year; 1 has already been disqualified for using a taxi, leaving the rest to battle it out between themselves. The disqualified entrant is still out there cycling, determined to finish the event anyway.

Fancy having a go yourself? Well, there must be worse ways to shake off your midlife crisis. Ok, maybe not. This race is an annual event, so the 2015 race still has vacancies, and you can start from Auckland if you like. Browse our books on cycling training and explore Kiwi Radonneurs – Long distance cycling in New Zealand.

Appetite whetted? Well, that’s great, because if you can’t make it for the next around the world race, how about the upcoming TransAmerica event in June (you just have to cycle across North America for that one, but it’s a different event from the RAAM – Race Across America- which also entails cycling across the USA, and also in June, but using a different route). If you would like a bit of Euroculture with your chafing, there’s also the Transcontinental race across Europe, starting from London and ending in Istanbul in August. This one adds another level of challenge in that the cyclists have to be entirely unsupported, which means if they can’t carry it on the bike, it doesn’t go.

New Zealand isn’t entirely out of the loop with endurance cycle races – some time ago (2001) there was an end to end event, the Mizone Endurazone Bluff to Cape Reinga 2001 Challenge, chronicled by Christchurch’s own John Hellemans in his book The Misery of Staying Upright. Alas we don’t have such an event here any more, but there are opportunities for long distance rides at the Lake Taupo Cycle Challenge, which offers 320km, 640km and 1280km distances, should the ‘standard’ distance of 160km not be enough for you.

My dears, think of the chafing! 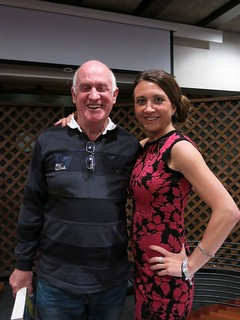 Me and my Dad like to go and listen to writers. We’ve been to Lee Child, Rebecca Macfie, and last night we saw Camilla Läckberg, Swedish crime writer. She has written 8 crime novels (and cookbooks and kids’ books), sold 12 million copies, been translated into 37 languages. Camilla is in New Zealand for the Auckland Writers Festival, and appeared in Christchurch courtesy of them and The Press Christchurch Writers Festival.

We claimed our spot early, and chatted to a Timaru couple who are big Camilla fans. In a librariany diversion, the woman talked about the crime writers she liked, and how she remembers what library books she’s read (initialises the book).

Camilla proved to be a funny, smart woman (in fabulous vertiginous shoes) with as many good stories in life as on the page. She is a gun Latin dancer, courtesy of an appearance on Sweden’s version of Strictly come dancing (see her in action at her first pro-am competition). She writes about Fjällbacka, a small fishing community on Sweden’s west coast – her real-life hometown. Fjällbacka is proud of her, and there are even guided tours related to her books. Journalists occasionally visit and ask for Camilla, and her Mum goes to meet them and poses for photos.

Camilla spoke to Ruth Todd of the PlainsFM show Bookenz and kicked the evening off by reading the opening few pages of her latest book Buried Angels. Describing the process of writing it, she said the story began as a picture in her head – a huge dining room table set for Easter, empty, where did everyone go?

The other crucial strand of the book germinated after a guided tour of Fjällbacka. The guide talked about the Swedish connections of Hermann Göring. Camilla stumbled upon a real life mystery. Göring had been married to a Swedish woman Carin von Kantzow. She died in 1931:

Her death came as a great blow to Göring. He named the baronial hunting lodge he built from 1933 Carinhall, in her honour. It was there that he had her body re-interred from her original grave in Sweden, in a funeral attended by Adolf Hitler.

After the breakup of Göring’s estate, Carin’s Swedish family were sent her cremated remains in the 1950s. But in the early 90s, another coffin was found and it was identified as Carin. Discovering this was “one of those moments when you can hear angels singing” – who was the other body? What happened? Perfect fodder for a crime writer who incorporates history into her work.

Buried Angels and Camilla’s other books feature Detective Patrick Hedstrom and Erica Falck, crime writer and researcher. She sees the couple as “one main character”.

Patrick is ordinary, he “doesn’t listen to opera, doesn’t listen to jazz, likes Bruce Springsteen”. He is based on her first husband, an economist, not her second ex-husband who is a policeman.

The couple were dating in her first book – the “five times a night thing” and eight years later: “It’s Saturday night, maybe we should?”

She “started lending her own life to Erica” and considers the pair her best friends:

It’s embarrassing to turn 40 and have two imaginary people as your best friends. 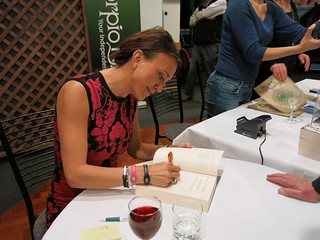 Camilla’s dream was always to be a writer. And it seems crime writing was her destiny. Her first book – when she was 4 – was about Santa and his wife. It started off happy, but in four pages “it goes straight to hell” and “Santa’s wife is beaten to death”.  She was infected with the “book bug” by her father and from the age of 7 was a big Agatha Christie fan:

I liked to be in her universe … she was a very very cool lady.

Camilla started her working career as an economist, but did a crime writing course when she was on maternity leave and her first book started as an assignment. Her writing style is to write the historical sections of her book sometimes in between, sometimes all together. But the parts set in the present day she writes chronologically:

When I am on page one, I don’t have a clue what’s happening in page 70.  I know about 2% of the book at the start … I know my final destination.

When the manuscript is finished, it goes to her editor who Camilla proclaims is strict but amazing.

She writes mostly at home, sometimes in pyjamas and her best time is writing is when the kids are at kindergarten and school:

In my view, inspiration is a myth … my best writing advice is “Glue your butt to a chair”. 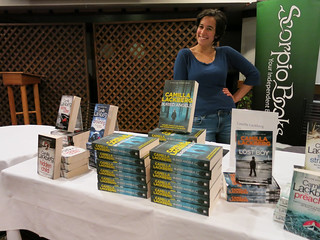 Composer/pianist Jonathan Besser was born in New York City in 1949, and studied composition in New York. Resident in New Zealand since 1974, he has composed and performed original music for many film, radio, stage and TV as well as making numerous recordings.

I composed this music after reading my Australian friend Roger McDonald’s “Mr Darwin’s Shooter” – I was taken on a journey on the salty decks of history through Roger’s inspired language.

In 1998 a very powerful Jewish exhibition arrived in Auckland at the same time I did. The exhibition from Prague was called “Precious Legacy – treasures from the Holocaust”. I was touched equally by the household and the sacred objects; how religious practice and everyday life were so bound together. It was an important opportunity to reflect on the enormity of feelings that the Holocaust evokes. My people, my culture, my history, my century.