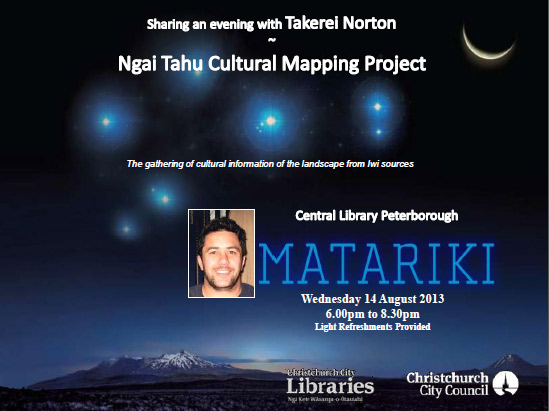 Come along to Central Library Peterborough on Wednesday 14 August 2013 to hear Takerei Norton talk about the Ngāi Tahu Cultural Mapping Project. This is a  collection of stories and names gathered from Ngāi Tahu kaumatua relating to the land. We would love you to stay and enjoy a cup of tea at the conclusion of this informative session.

OverDrive is where you go at Christchurch City Libraries for e-books and downloadable audiobooks. It is free to use for library members and has been growing exponentially in popularity and use.  What started as a small collection of audiobooks has sprung up into a huge range of content. Some of this content is very odd indeed …

although dealing with issues of a broken family, loneliness and bullying, this is an enjoyable and easy read, the story interwoven with myth, is written in a way that makes it entirely believable.

LIANZA Young Adult Fiction Award. For the distinguished contribution to literature for children and young adults aged 13 years and above. The Nature of Ash by Mandy Hager, (Random House New Zealand)

The strong and extremely well-developed characters, along with the dystopian theme, formed an action-packed story that in many ways reflects the current issues facing humankind today.

Matthews’ wood cuts and stencils are expertly used in a Japanese-esque style and layers and layers of colour and texture build to create the final illustration … A visually inviting cover is the initial link from picture, to story, to words, and the explosion of imaginative synapses in between.

LIANZA Non Fiction Award – Elsie Locke Medal
For a work that is considered to be a distinguished contribution to non-fiction for young people.
At the Beach: Explore & Discover the New Zealand Seashore by Ned Barraud and Gillian Candler, (Craig Potton Publishing)

It is a hot-chocolate-table book for not only the child who loves facts but the one who love quirky stuff and stories. It is a book for browsing.

LIANZA Librarians’ Choice Award 2013. Awarded to the most popular finalist across all awards, as judged by professional librarians of LIANZA. My Brother’s War by David Hill, (Penguin NZ)

Te Rangi Rangi Tangohau, Te Kura Pounamu Panel Convenor, says children will immediately be drawn into the story because of the simplicity of a lonely mule gazing into the sky dreaming of something new:

It is a humorous read with simple and colourful illustrations that will appeal to young readers. The friendly use of onomatopoeia works well with children and the descriptive and repetitive language will happily guide the reader to patu-patupatu, kiriti=karati, takahi-takatakahi through the story.