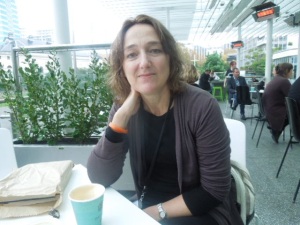 Guess who I bumped into this morning? Canterbury’s own Tanya Moir who is here at the Auckland Writers and Readers Festival 2013 to promote her new book, Anticipation.

Now, Tanya and I go back a long way. In another life, we wrote advertising copy together and I’ve followed her writing career with interest. I cheered when she published her first novel La Rochelle’s Road, an historical novel about British settlers on Banks Peninsula, and I was keen to hear what she was up to now.

PQ (Post Quake) Tanya moved to Auckland because her husband found work up here. She is living in a beach settlement half an hour out of the city where the surf crashes over a black sand beach. Auckland’s  west coast is a great place for old surfers and writers to hang out, a laid-back community tucked away from the hustle and bustle of the big city. The couple plans to return to Christchurch permanently one day and they visit the region frequently as they still have a property on Banks Peninsula.

tly working on a new novel. It’s a contemporary work and she feels she’s nearly half way through the process. When I ask if she’s happy in her work, she says everything else seems boring in comparison. She loves to write.

Her constant companion is a five month old Irish wolfhound puppy who is already the size of a well built Labrador. She says he’s crazy but a great companion.

Tanya will be appearing in History Repeating in the Limelight Room at the Aotea Centre on Sunday at 4pm. In this FREE session four writers will read sections from their work that reference the repeating of history.

If you’re lucky enough to be in Auckland, get along to the session. If not, place a hold on Anticipation at Christchurch City Libraries. Highly recommended contemporary New Zealand literature.