Gareth Farr was born on this day in 1968. Back in the 70s we would have called him cool. The New Zealand composer who is a world class drummer and used to have a drag act. He already stands out from the crowd before you hear his music.

I’m no judge of drag acts, but I was once privileged to hear his  Lilith LaCroix drum drag act and I can tell you that the drumming was fantastic – a once in a lifetime experience. As for his music, it is always compelling. His work is heavily influenced by his interest in percussion, especially of the Indonesian Gamelan, but also other Pacific and Maori drumming traditions, making him a New Zealand and Pacific composer.

Educated here and at New York’s Eastman School of Music, he launched his career with a number of works played at the 1996 New Zealand International Festival of the Arts. Since then he has been commissioned to create music for many high profile occasions including the 50th anniversary of the New Zealand Symphony Orchestra, the opening of the Museum of New Zealand and the 2000 Olympic Games in Sydney (a concerto for percussionist Evelyn Glennie ).

One of his most popular works is Kembang Suling, although the dramatic Te Papa has wider appeal. Try this version if you’re looking for something new and exciting. You might also recognise his theme to the TV programme Duggan.

He has also created some haunting works with Richard Nunn on Taonga Puoro, such as this farewell He Poroporoaki

Most recently at the NZSO Odes to Joy concert in 2011 he debuted Kaitiaki, a stunning new work which reflected the spirit of Beethoven’s Ninth. It was commissioned by the NZSO, with words by Witi Ihimaera and sung by an all New Zealand cast of Simon O’Neill, Jonathan Lemalu, Madeleine Pierard and Sarah Castle.

Explore more of Gareth Farr’s music on Naxos which contains many of his recordings from throughout his career.

Don’t forget to enter into the draw for tickets to this great movie. Find out more here.

Having recently spent 3 weeks off work after surgery, I have a new respect for the Christchurch City Libraries DVD collection.

Knowing before I left work that I would be unable to do much except sit in my chair, boosted by cushions to enable me to get up gingerly, making me feel several decades older than I am, I had maxed out my card with DVDs from the collection.

I’d stagger around to get my bowl of cereal in the morning, get phones, drinks, remotes all in easy reach and settle in for the day’s viewing. My daily exertion was to get up and change the dvds every couple of hours – yes, sad I know. From the complete first seasons of  classic TV series’ Upstairs Downstairs and I Claudius, I moved to dramas including Love and Other Impossible Pursuits, and Rom Coms such as Then She Found Me and Under the Tuscan Sun. Onwards I went to Grand Designs to remind me why I never want to build my own house, and stopped to dip into some classics, such as  The Good the Bad and the Ugly and The Long Hot Summer. This last one has sizzling performances from Paul Newman, Joanna Woodward and Orson Wells, and was one of the highlights of my enforced downtime viewing.

Many have their roots in books, which depending on your preference could be read before or after the movie is viewed.

I also revisited others I’d seen in the theatre and enjoyed, such as Appaloosa and Across the Universe.  The stars of the big and small screen certainly kept me from going completely mad from boredom, and the broad array of DVDs available in the library collection is certainly worth dipping into.

What are some of your favourite movies you’ve got from our collection?

We’ve got another hot movie ticket competition courtesy of Roadshow Film Distribut0rs – 5 double passes to the movie My Week With Marilyn. The movie is released in New Zealand on March 8, 2012.

Early in the summer of 1956, American film star Marilyn Monroe  set foot on British soil for the first time.  On honeymoon with her husband, the celebrated playwright Arthur Miller, Monroe came to England to shoot The Prince and the Showgirl – the film that famously united her with Sir Laurence Olivier, the British theatre and film legend who directed and co-starred in the film.
That same summer, 23-year-old Colin Clark set foot on a film set for the first time in his life.  Newly graduated from Oxford, Clark aspired to be a filmmaker and found a job as a lowly production hand on the set of The Prince and the Showgirl.  Forty years later, he recounted his experiences of the six-month shoot in a memoir entitled, ‘The Prince, the Showgirl and Me.’ But one week in Clark’s account was missing.

You can read that account as  My Week with Marilyn from our library catalogue. To find more recommendations  check out our Read the book then see the film.

So how can you win? Just email and tell us who is your favourite Marilyn Monroe image or movie is –  email us at libwebteam@ccc.govt.nz including your name, phone number, library card number and address. We’ll get in touch with the winners and hook you up with the tickets.

Who wouldn’t want a way to conduct business online? You can sit  outside in the sun with a glass of wine and a bar of chocolate and let your fingers network. Access this resource at the Source  from home with your library card number and PIN, or at our community libraries.

PS:  This is a lovely photo from our heritage image collection displaying a business from days gone by. Uncle Tom’s Cabin & Tearooms, North New Brighton, Christchurch : pictured on the step are two of the five proprietor/postmaster’s family who ran the store around 1911.

Prior to the quakes of recent months, my social life included an occasional visit to the cinema. With the demise of the Arts Centre cinema, which was my frequent haunt, and a reluctance to enter cinemas in shopping malls without sussing out where ALL the escape routes are (a particular behavioural trait which previously I had displayed only when flying …),  I found I was watching a good deal of films in DVD format at home. Nothing wrong with this except my perceived lack of  ‘a sense of occasion’ which cinema visits had previously inspired in me.

However, this all changed when the trailer for War Horse appeared on my small screen. Suddenly the TV and my lounge were too small for such an epic story… And what a story! Imagine  a combination of Gone with the wind for wonderful technicolour processes; a plethora of  Lassie films for pathos; and a similar storytelling format to  Black Beauty, whereby a succession of characters are introduced through the short snatches of time they spend with Joey, aka ‘War Horse’, in a truly unsettling period of history.

My background knowledge of the use of horses in war, and especially during the 1st World War, was admittedly sketchy, but for all the graphic and mental horrors of this period in history, I felt the film’s editing was first rate – the futility and carnage of battle was left to the viewer’s imagination (my runaway ‘fertile’ imagination notwithstanding). Now I am going to read the book. As a general rule of thumb books come first followed by film adaptations, but not this time…

Anyone else admit to being influenced by the film first before embarking on the novel?

If so, check out our listings of Books that have been made into films and television. (For those movies that are yet to be released try Read the book – then see the film.)

A Good Deed: pre-1900
“My great grandfather and his wife arrived in New Zealand November 1859 on the Zealandia. Parents told me John Hefwitt did a good deed for a Maori chief and was presented with a Huia feather.” Feather can no longer be found.  John Hepworth

I took a walk with my camera around my neighbourhood this afternoon. Normally it is very quiet at this time of day. If you listen carefully, you can hear the local children playing at one of the schools in the area. A dog or two might bark and a few cars go by. Wheelie bins line the streets like a guard of honour and road cones keep us out of the pot holes.

It is a huge contrast with last year. Last year the neighbourhood was awash with water and silt as a result of the soil liquefaction. Road cones and wheelie bins were used to mark the sink holes. Neighbours called out to each other to see if they needed help and cars were abandoned in the street.

Today, most of  the silt has gone, the roads and houses are pretty battered and the road cones are serving a dual purpose. The road crews put the cones where the road works and potholes are. The locals have put flowers in them as a tribute to those who died last year as a result of the February earthquake. They are not fancy, florist shop flowers. They are flowers from our gardens –  in a cone near some vacant land, I even saw dandelions and yarrow being used.

See photos of  road cones and flowers on our Flickr page.

In the shadow of the 22 February anniversary, here are some ways to remember, and to share your experiences:

You can explore our resources too:

Other places to share your stories, images and research: 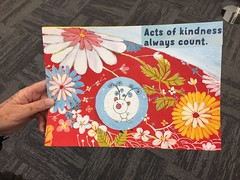