I remember the time vividly. I was in Wellington studying for my Library qualification. It was wet and windy, and my boyfriend suggested we go and see Vigil directed by Vincent Ward.  I was cold and miserable beforehand, and even more so at the end of the movie.  I felt damp and slightly mildewy and  I remember hating the movie.  He saw it three times.

It was many years later that I ventured out to see another Vincent Ward movie, Map of the human heart. I don’t remember anything from it except two people making love on top of a barrage balloon. I remember being confused by the whole thing and I think we had an argument about what the movie was actually about. The then boyfriend (now husband) continued to see all the movies Ward has made and has remained a true fan, so when I saw that he had written a book Vincent Ward the past awaits : people, images film I thought that I would get it out of the library for him.

Dipping into it one day I started reading and realised that I loved the book more than I disliked the films, and I wish I could have somehow magically read it before I’d seen  them. Vincent Ward writes very personally about the thoughts and emotions behind the films. He is a good writer, and the photos are fantastic. He includes some of his art work which I don’t particularly like, but that aside, this book is quite something and well worth borrowing. I may even watch the movies again and see if I have a new appreciation!  Luckily we have some in the Library:

30 years ago today … 31 July 1981.
Every Friday over the winter, the Canterbury branch of the Workers’ Educational Association held a forum on a topic of national or local interest. The topic was introduced by an informed speaker and then opened up for general discussion.

More information on the Springbok Tour:

The library has several collections that let you discover the many faces of our city through the years. There are beautiful books, such as Gwenda Turner’s Christchurch, and Christchurch Changing by Geoffrey Rice, and there are some wonderful hidden gems in our online collection:

If these resources whet your appetite, don’t forget to also search the library’s catalogue for more publications about Christchurch and Canterbury. Try the following searches:

I have just placed a hold on Canterbury – The Big Snow, 1992 to see how different Christchurch in white looked then and now.

What other gems showing our city and region’s history would you recommend?

Nations, that is. The latest, South Sudan, is not even a month old, having officially been ‘born’ on 9 July 2011.

It is undeniably trivial, but, as a librarian, one of my first thoughts was of the atlases that now need updating.

I have always liked maps – an interest no doubt fostered by the year I spent at intermediate school sitting facing a wall-size map of Africa. While the teacher droned on, I’d listen with half an ear, while my mind would take off on flights of fancy, flitting from the mosques of mysterious Timbuktu to the markets of Zanzibar.

I’d follow the path of the Nile from its source at the centre of the continent, near that tantalising line that signalled the Equator, past the pyramids in Cairo to Damietta and Rosetta where the mighty river fans out to meet the Mediterranean Sea. And I’d wonder at the bravery of those first explorers who, prior to the opening of the Suez Canal, ventured to circumnavigate Africa to reach the fabulous Spice Islands.

It’s difficult to fathom the many ways in which Africa and the world have changed in the twenty or so years since I sat daydreaming in front of that map. And I’m not thinking only in terms of political changes of borders and placenames. As we have recently been reminded, the earth is constantly transforming itself: mountains rise, sea levels fluctate high and low, and rocks crumble.

At first glance, this is just another pleasant scene of historical interest, at the A&P Show in 1910. You can look at the clothes and the expressions of the people; you can marvel at the beards and hats – you can even wonder what people were looking at on the left.

Then, if you’re like me, you look to the back of the picture and see the sign for Casey, the almost man. What the? A genuine sideshow?  Diving into Papers Past, I find that The Grey River Argus described Casey in 1911 as ‘the wonder of the age’. Were they overdoing it? Possibly; but Casey’s talents were more highly evolved than ‘almost-man’ suggests.

He played the mouth organ and the piano, swung his right like a prize fighter, and even toasted the audience’s health. As a finale, the Argus reported, he shook hands with spectators in a way that ‘makes one think he belongs to some Masonic lodge or secret society‘.

The paper’s review concludes with the line that audience members left freely expressing the opinion that:

never before in the history of Greymouth has such a marvellous and interesting entertainment been placed before the West Coast public.

Whew. High praise. Read more about Casey, the almost man, in Papers Past. And ponder this: What would today’s equivalent be? 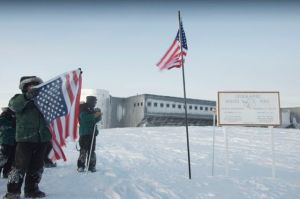 Like the snow we’ve had recently? What about really embracing the snowby spending winter in Antarctica? A friend of mine stayed at the South Pole last year. I’m not sure how much of Antarctica she saw, but she had a great time.

She was supposed to be there working in the medical clinic, but she didn’t seem to mind that her first job was washing all the bed linen from the summer visitors who just left, or that there was only enough water for a two showers a week.
She happily took on the regular duties of  checking the machinery that kept the place going and greasing the telescope in sub-zero temperatures using a paint brush.

She had a great time meeting scientists from all over the world and the experience was a pretty special and unique one. She sent back some fantastic photos. Did you know there are two South Poles? There’s the ceremonial one, nicely striped in red and white, and the true one, which marks the geographically correct place which has to be shifted each year.

Sadly it’s not an experience all of us can share. For one thing you have to fill out about 60 pages of psychological tests before they let you go and for another, there is only room for about 40 people. The closest we can come are  documentaries and films by those who have been there and books like South of Sixty : Life on an Antarctic Base, or even by looking at the photos in books like The Frozen World.

The recollections of Henry Sunderland’s adventures  in the seventies on our website are pretty interesting, and Steve Braunias has a more recent take in Smoking in Antarctica.

Who knows, reading about it might even make you feel that it is really quite warm outside.

The Press Christchurch Writers Festival just keeps on keeping on. Two festivals couldn’t proceed due to earthquakes, their Kidsfest events had to be cancelled on Tuesday due to snow, but the first of the literary events they are determined to bring to Christchurch went ahead successfully last night.

Lloyd Jones and Rachael King were in conversation about The Silence Beyond: Selected Writings of Michael King, the collection Rachael has assembled of her father’s essays, talks and eulogies.

It’s always good to get the chance to hear writers talk about their own work, but the novelty of  listening to two wonderful writers talk about someone else made for a fantastic evening. It’s a shame there weren’t more people there to enjoy it.

The man who emerged from their reminiscences and from the the excerpts they read from The Silence Beyond was not at all how I imagined him. Surely “one of New Zealand’s greatest modern thinkers” would be super serious, even a bit dour.

King may have been serious about his work, but he wasn’t one of those people who seeks to present himself in the best possible light – writing about a drunken student escapade involving a late-night visit to Charles Brasch  and several very amusing cases of mistaken identity proves that.  The readings and the reminiscences really made me want to read every word in The Silence Beyond, which is always a good sign. Too often I’ve been to literary events where the authors actually put me off reading their books.

My favourite question of the night was: what book did Rachael think Michael would be proudest of? The answer was Moriori.

Do you have a favourite Michael King book?

Visiting London in May I made a pilgrimage to the Victoria and Albert Museum and was lucky enough to experience one of the most amazing exhibitions I have ever seen. The  Cult of Beauty: the Aesthetic Movement 1860-1900, brought together works made by artists, architects and designers who were trying to create art that existed only to be beautiful.

The collection of paintings, photographs and sculptures I’d only ever expected to see in books or on their covers (The beguiling of Merlin – fondly remembered from the first edition of Possession and infinitely more fitting than Gwyneth Paltrow) was overwhelming enough, but the things were even better.  Somehow clothes, objects and jewellery exert a powerful fascination, perhaps because they are less likely to survive actually being used.

Too stingy and too over-packed to buy the book of the exhibition and schlep it back, I was very excited to see it arrive in the library, but smugness at my frugality fights with the desire to own it as a reminder of a long day just gazing at ‘art for art’s sake’.

Not just a great reflection of the exhibition, which it is, this book is a work of art and a thing of beauty in its own right.

Do you have a favourite exhibition that you’ve seen recently?

Given the rising cost of food and petrol, as well as continued concern about food miles and food origins, it seems that the once-subversive idea of not having a lawn is far less controversial than it once was.

There’s a growing number of people who have decided to permanently get rid of their lawn and grow food instead. Here’s two books to get you started:

We’ve got plenty of books to help you on your way to growing your own food. Try a subject search for :

If community gardens are more your thing, check out:

Post quakes I have been movie-starved with all my favourite cinemas out of action. In the last month as part of a major “pull yourself together and get on with it”, I have been watching more movies including two visits to actual cinemas (one was to a popcorn palace I wouldn’t normally frequent).

I’ve also watched movies on television and borrowed some from our library collection which I now realise is quite varied and extensive.

Just look at the range in the latest arrivals  in the last month. A fistful of dollars, Giant, Pale rider, Hawaii – some oldies there. Then more recent releases like Tron legacy, Sister smile, Seraphine,  Silent wedding.

Actors from Ricky Gervais to Maggie Smith to John Malkovich to Julie Andrews. Directors from George Stevens to Costa-Gravas to Sergio Leone to Stephen Frears.

I’m looking forward to the New Zealand International Film Festival but in the meantime – the library movie collection is my happy place.