What a lovely photograph! I’ve been looking through our collection of heritage photos from the Selwyn District and  wedding and wedding anniversary photographs featured regularly. Most were splendiferous lineups of hats and suits but I loved this closeup of  Mr and Mrs George Foster – their character filled faces – and their modest best.

Interesting historical note that they came to New Zealand on the Edwin Fox. 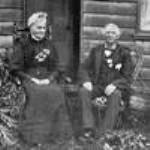 Some other weddings and wedding anniversary groups captured in all their glory – Prestidge, Gillanders/Stark, Paterson/Anderson, Fussell, Kneeshaw.

The collection features photographs of the Selwyn district from the Weekly press and the Canterbury times between the 1860s and the 1920s. They have been produced as a joint project between Selwyn District Council and Christchurch City Libraries. They were photographed from the newspapers by Stephen Wright.

Every year since 2000, we have been compiling the favourite reads of the year – from staff, customers and those great ‘best of’ lists that we spot.

Our Best reads of 2010 list has just been launched, and we’ll keep adding to it as we spot lists (The New York Times 100 notable books of 2010 has just been published) and we want YOU to have your say too via our short survey.

What’s on the list already? Here’s a wee tasty sampler to whet your appetite: