I’ve recently read or re-read three books that deal with new aspects of familar subjects: Ancient Egypt, the Discovery of America and Pompeii.

Mary Beard’s Pompeii : the life of a Roman town,  follows a book that I thought was the definitive work on the subject released only in 2005. That book was readable and informative. However, true to form Beard’s managed to make one reassess preconceptions of an overworked topic. She  critically reassesses the casualty rate (many of the bodies were those of people returning after the eruption), the location of bodies (cynically noting how the discovery of corpses seemed to coincide with the arrival of prominent visitors in the eighteenth century), makes one think twice about the alleged bawdiness of the city (not every other house was a brothel) and points out that the life of the place was not fixed: the buildings were a confused melange of several centuries rather than a town whose buildings all date from the same decade.  Her main success is in bringing the place and its people alive and making one think twice before accepting the conclusions drawn by archaeologists.

A similar achievement is performed by my other two authors:

END_OF_DOCUMENT_TOKEN_TO_BE_REPLACED 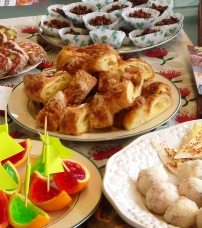 It may not be common knowledge amongst the general populace but librarians love a nice morning tea and what could be more fitting in preparation for celebrating our national day, than indulging in a little food nostalgia?

And if all that isn’t enough to have you dreaming of lamingtons over the long weekend then check out our page on iconic Kiwi foods.  Dig in!